New York, NY –  Due to a massive snow storm during the opening reception of artist SEEROON YERETZIAN‘s exhibit, I EXIST, a second opportunity will be given with a Closing Reception on Thursday, MARCH 26, 2015, from 5:00pm to 8:00pm at the NATIONAL ASSOCIATION OF WOMEN ARTISTS’ Art Gallery at 80 Fifth Avenue, Suite 1405, New York, NY 10011.  The exhibit is currently on display.  Gallery hours are Tuesday through Friday, 10:00 a.m. to 5:00 p.m.

Although a massive snow storm hit the East Coast during the opening reception, causing a state of emergency for New Jersey and other areas, a few prominent figures were able to attend such as actor Eric Bogosian, author Meline Toumani, and artist Kardash Onnig.  What made the event even more special was the presence of the artist Seeroon Yeretzian, who suffers from Lou Gehrig’s disease which has left her practically immobile and unable to speak.  With the help of her son Arno Yeretzian and her best friend, Harry Mesrobian, she made the trek to the hustling, freezing city of New York.  Harry Mesrobian gave a very heartfelt speech about Seeroon’s remarkable talent and unique vision as an artist and her passion and diligence as an extremely hard-working human being.  Many were left in tears.  Her son Arno Yeretzian read her words which she had written one letter at a time using a retina-reading laser device called Dynavox.  Parts of this event will be presented at the closing reception.  Don’t miss this opportunity to view and to purchase Seeroon’s art before it returns to Los Angeles. 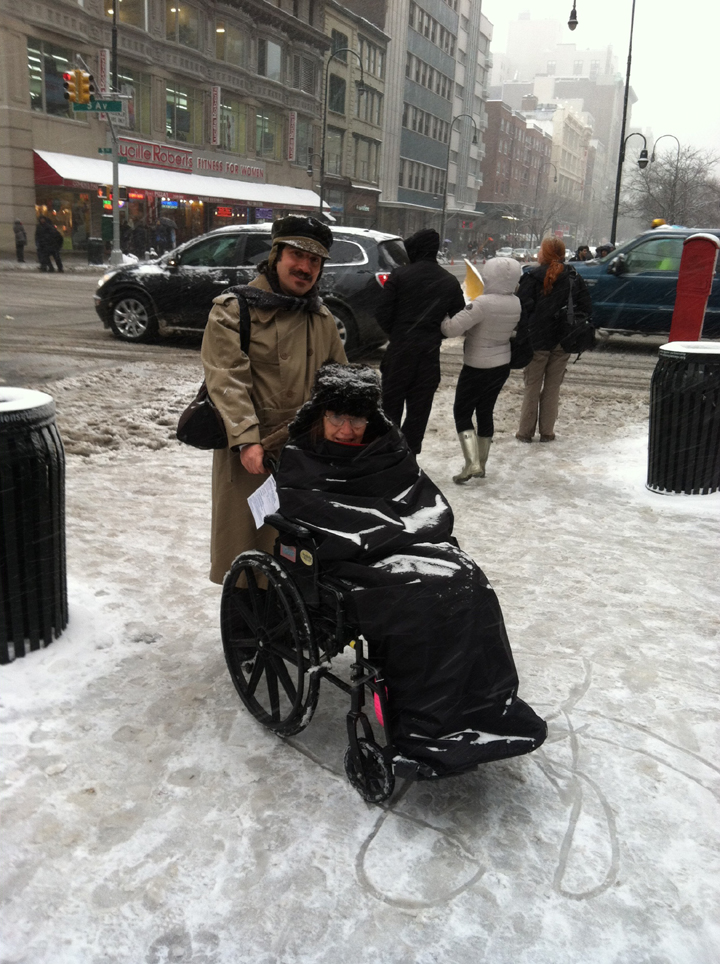 SEEROON YERETZIAN is an accomplished artist with diverse talents in painting, sculpture, and illustration. Born in 1951 at the Tiro refugee camp in Beirut , Lebanon, Seeroon was exposed to both the beauty and suffering of the world. This dichotomy has emerged in her work in what she calls her “Sunshine” and “Moonshine” art. The “Sunshine” pieces are rich in color, showcasing many life-giving earthly elements and produced during daytime. Conversely, the “Moonshine” pieces reflect themes based on personal experiences ranging from the Armenian Genocide to homelessness and self identity. Recognized for reviving the art of prehistoric Armenian petroglyphs and medieval Armenian ornamental art, her masterpieces include the elaborate “Four Seasons” and her 17 alphabets of different languages executed in the tradition and style of the Armenian ornate initials. Seeroon received her Bachelor’s Degree in Fine Arts in 1985 from the Otis-Parsons Art Institute and School of Design. She has authored three books, her self titled art book, Seeroon Yeretzian, her book of poetry, Word Weaving & Black Seat Confessions, and her best-seller, Seeroon Darer: Armenian Ornate Initials. This book recently served as the artistic inspiration for the design of the Armenian American Rose Float Association’s award winning float in the 126th Annual Rose Parade, entitled, Cradle of Civilization. In 2014, the City of Glendale, California, bestowed upon her its “Lifetime Achievement Award” for the arts. Although she was diagnosed with Lou Gehrig’s disease in 2012, Seeroon continues to create to this day. She has exhibited in numerous solo and group shows and her art is found in private collections and major institutions. AIWA-SF had the distinct honor of interviewing Seeroon Yereztian, you can read the powerful and life-changing interview here.

The NATIONAL ASSOCIATION OF WOMEN ARTISTS (N.A.W.A.) was founded in 1889 as the Women’s Art Club. Renamed in 1941, the Association fosters public awareness of, and interest in, visual art created by women in the United States . The Association promotes culture and education in the visual arts through exhibitions of its members’ works, educational programs, scholarships, awards, its historical archive, and other appropriate means.  While encouraging contemporary art and emerging artists, the Association honors and continues the long and important contribution of women to the history of American culture and art.