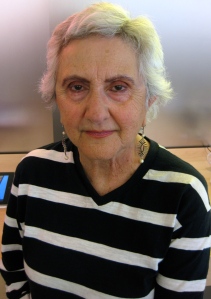 Ellen Sarkisian Chesnut is a profound writer, avid artist and teacher. A graduate of Mission High School and San Francisco State University, where she received a degree in Social Studies with a minor in English.  She is the author of Deli Sarkis: The Scars He Carried  a moving book that tells the first-hand story of her father who witnessed the Armenian Genocide of 1915-1923.  Born in Mosul, Iraq, Ellen came to America at the age of 2 via the “MS Boschfontein.”

I (Christine) had the distinct honor of speaking with Ellen Sarkisian Chesnut about her gripping book Deli Sarkis: The Scars He Carried. The book shares the horrific realities endured by our Armenian ancestors. I invite all to purchase a copy of the book at: www.scarshecarried.com. The book can also be purchased from Amazon and all independent bookstores can order the book.

The following is an excerpt of my interview with Ellen. Again, I sincerely hope each of you will purchase and read the book. 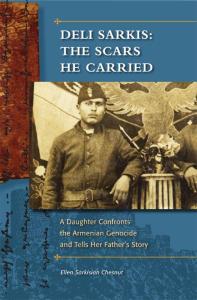 Question 1: What motivated you to write and publish Deli Sarkis: The Scars He Carried?

{Ellen}:  It was my Dad’s story. I knew he had a compelling story, I knew my Dad always wanted a book to keep the stories and atrocities of the Genocide remembered. Sadly, he didn’t live long enough to see the published book; I think he would have been proud.  My Dad, Deli Sarkis, was from the village of Keramet in the Southern Marmara region of Turkey.  Keramet was next to the large fresh water lake known as Iznik Lake. The distance from Lake Iznik to Lake Van is 1,161 km or 721.41 miles.

During the deportations, the villagers of Keramet were taken by cattle car leaving from the train station of Mekece. The train trip lasted 3 to 4 days. When the people disembarked, they were in the province of Adana. After walking for some time, the deportees were allowed to rest near Ceyhan. After the short respite, they were forced by gendarmes who had already been guarding them into Syria and the desert regions.

Anything happened while crossing Syria. Many dropped of exhaustion and died there.

In Raqqa which is now the headquarters of ISIS in Syria, the Kerametsis were attacked by Arabs under the eyes of the Turkish gendarmes who did nothing to stop the atrocities. Many able bodied men and boys were killed; girls and young matrons were taken by Arabs never to be seen again.

Question 2: How did you start to write the book?

{Ellen}:  In 1982 my dear Mother, Evelyn Shamlian Sarkisian, passed away and my Father wasn’t doing well. At that time the realization that I may lose another parent hit me.  The thought of not having a record of the history of their lives and stories became a stark reality. So, I started to write and research.  I collaborated with Nazareth Bidanian, an Armenian intellectual, and together we would write letters and send them all over as I tried to connect with people from Keramet. I would write letters and Nazareth would translate them into Armenian.  I posted advertisements in newspapers and one day I got a response. Stephan Karadian told about Varsenig Topouzian who was from the Southern Marmara region. She was in a convalescent home in Detroit, Michigan.  I called her and as I was speaking with her, her sister-in-law Florence Pashayan, overheard and gasped “Oh my God! My mother was from Keramet!” To this day, I am dear friends with Florence Pashayan who is 93.  She got me connected with her Mother’s cousin, Hagop Nigogossian, who lived in France and was also from Keramet.

This is how I did my research. At the time there wasn’t a social network, so I had to use traditional means of research. Throughout the journey, I uncovered remarkable stories and met marvelous individuals.  I learned of stories, gathered photos and met with Professor Santoukht Mikaelian of UC Berkeley Armenian Studies.  Together we translated the Armenian notations on the backs of photographs.

Question 3: How do you think your Father kept going?

{Ellen}:  My Father put forth the conscious effort to see the good in people. This was hard, because he saw the horrific things that humans are capable of doing to other humans.  As I share in the book, one day at the age of 10, in Der Zor, Syria, he came upon a mile long trench where Armenian bodies were being thrown; lime was used to make the corpses decay faster. When he ran back to the camp, he was hysterical and my Grandmother had to slap him several times just to get him to calm down a bit.  These are the kinds of unfathomable circumstances they observed and endured.

My Father, worked hard to see the good in people. He was a liked man; in fact, when he was living in the orphanage, Mezdia who was the only daughter of Ahmed Beg visited Sarkis. My father was their servant for several years and she brought him some money and a tray of sweets that the orphanage children shared.

My Father was a true survivor; he spoke several languages including Turkish, Armenian, Greek, Arabic, Kurdish, Bulgarian, English and Farsi. He spoke with people in their native language and, perhaps that was a type of therapy for him.

However, my father had his share of issues. He became an alcoholic and suffered post traumatic syndrome. In the book, I talk about how he would often have night terrors and wake up in sweat.  One cannot see and go through what they went through during those times and be “right”.  We must respect and understand what they suffered.  Some time ago, it was common to hear one talk about a family member who “just wasn’t sane” and that speaks to the spirit of seeing deep human suffering.  One can’t simply get over something like that.

Question 4: Was there a saying or life principle your Father would regularly share?

{Ellen}:  He would always say, “Keep going and never lose yourself.”  I think that was his way of saying always remember, and be proud of your Armenian heritage and always keep going regardless of the circumstances of life.  Despite the several languages he spoke, my father would regularly say that Armenian was his favorite language, he was very proud to be Armenian.

Question 5: Your book is focused on the story of your Father; does your Mother have a similar story?

{Ellen}:  Oh yes! My Mother’s side of the family is from Marash. Every 20 years the Armenians of Marash would have to rebuild their homes and businesses that were destroyed by the Kurds and Turks. My mother’s family had to get ready for deportation three times. Finally, the authorities decided that they did not have to go as they needed the leather from my grandfather’s tannery. My grandfather, Hagop Shamlian, was a master tanner. His tannery was the only one of 50 in Marash owned by an Armenian. He supplied the government with his exceptional leather that was used to make boots for Turkish soldiers.

He was an unheralded hero of Marash and hired Armenians to work in his tannery during the war years 1915-1918 to keep them from being drafted and subsequently killed. He also hired Kurds and Turks so it didn’t look suspicious.

Question 5: What message do you have for today’s Armenian youth?

{Ellen}: I am so proud of this generation of Armenians.  They are very in touch with what is happening.  When we were growing up we spoke of the Genocide and our heritage at home, but we weren’t as outspoken as today’s generation can be, we were trying to assimilate.

WOW! At AIWA-SF we are so proud of Ellen for all she is doing to keep the stories alive. Each time I (Christine) speak with Ellen I get goose bumps; my heart fills with pain and pride as we talk about her family story, the Armenian Genocide and the spirit of the Armenian people.  The book Deli Sarkis: The Scars He Carried  is a commanding and compelling book that exposes the realities of the Armenian Genocide.  Thank you Ellen! We are so proud of you and cannot wait to read the book about your Mother’s story…If you haven’t already read the book, I highly recommend it!