Last year we were all moved by the first annual American-Armenian Float, “Cradle of Civilization” which won the prestigious President’s Award.  This year the community is excited to celebrate the second American Armenian Rose Float! The 127th Tournament of Roses Parade is themed “Find Your Adventure” and this years float, “Discover Armenia” is sure to delight.

2015 was an incredible year for the Armenian community: In April we honored the Centennial of the Armenian Genocide, System of a Down had a moving performance on eve of the April 24 in Armenia, Sebu Simonian of Capital Cities participated in many centennial events. Throughout the world people came together to honor Armenian history and culture.  Many notable celebrities including the Kardashian Family and Kanye West also visited for the first time.  Most recently, Conan O’Brien visited Armenia and did a full episode featuring his experience.

Thus, it’s of no surprise that this year’s American-Armenian Float celebrates the adventures one can discover in Armenia.  Sixteen top destinations in Armenia are beautifully depicted (listed with some history below).  First however, we must share those confirmed to represent Armenians this year:

The impressive float is huge, measuring 24 feet high, 18 feet wide and 55 feet long. Rich in color, depth and dimension, it is estimated that 16,107 flowers will be used.  Having visited Armenia myself for the first time in 2015, the float accurately and beautifully depicts the splendor of Armenia and does a wonderful job highlighting Armenia as a must visit tourist destination. Filled with impressive adventure and heartwarming history, 16 top destinations are highlighted:

Cascade Fountain:  The giant stairway in Yerevan, that links downtown Kentron with the Monument neighborhood.

Garni Gorge: Along the sides of the gorge are cliff walls of well preserved basalt columns, carved out by the Goght River. This portion of the Garni Gorge is typically referred to as the “Symphony of the Stones”.

Tatev Monastery: A 9th-century monastery located on a large basalt plateau near the Tatev village in Syunik Province in southeastern Armenia. The term “Tatev” usually refers to the monastery.  The monastic ensemble stands on the edge of a deep gorge of the Vorotan River.

Gavazan: Swinging Column, also known in Armenian as the Gavazan (cane), is a unique work of medieval engineering. Erected in 904 in the courtyard of the Tatev monastic complex, this eight-meter octahedral pillar is crowned with a cross-stone and is dedicated to the Holy Trinity. It was constructed with a special pivoting-base technique which allowed it to tilt as a result of seismic tremors, and even at the mere touch of a human hand, and then return to its initial position.

Temple of Garni: A reconstructed classical Armenian temple is a replica of the “Ardni” temple, of Araratian Kingdom, about 250 years older than the older temple in Greece. It served as a blueprint for architecture in Greece. It is the best-known structure and symbol of pre-Christian Armenia. It was built by king Tiridates I in the first century AD as a temple to the sun god Mihr. It is one of the main tourist attractions in Armenia and the central shrine of Armenian neo-paganism.

Hin Jugha: The largest khachkar cemetary in the world was located in Jugha.

Zvartnots Cathedral: Meaning “celestial angels” is a 7th-century centrally planned aisled tetraconch type Armenian cathedral built by the order of Catholicos Nerses the Builder from 643-652. Is now in ruins.

Ughtasar Petroglyphs: There are dozens of rock carvings, known as “Itsagir”, found in the territory of Armenia.

Mother Armenia: A female personification of Armenia. Her most public visual rendering is a monumental statue in Victory Park overlooking the capital city of Yerevan.

Urartian Sphinx: Erebuni Museum, corresponding to the Biblical Kingdom of Ararat was an Iron Age kingdom centered on Lake Van in the Armenian Highlands. 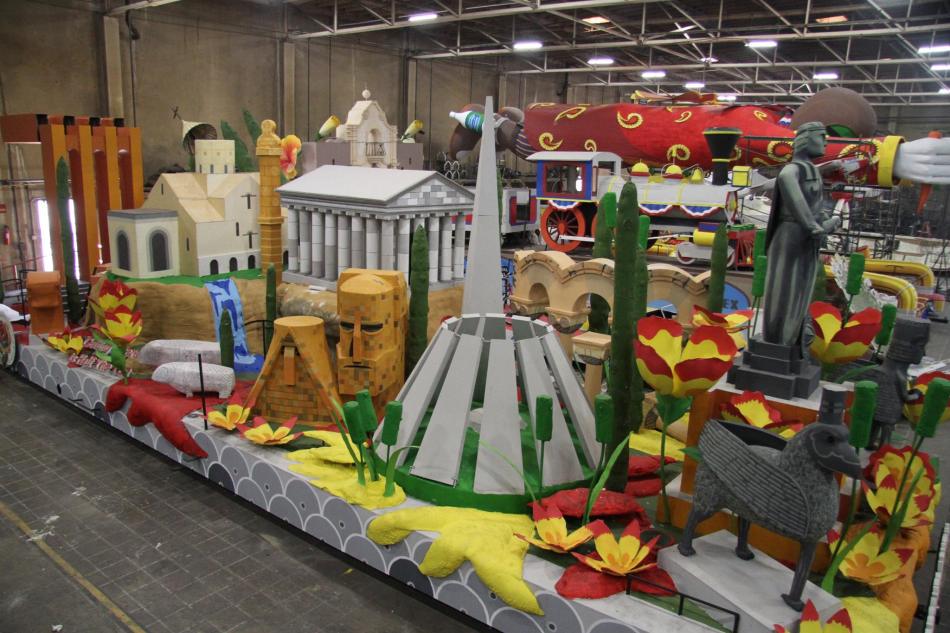 The design of the float took almost 4 months as The Armenian American Rose Float Association Inc. (AARFA), under the direction of Johnny Kanounji, designed the selected historic landmarks for accuracy.  The design was then submitted for review to Pheonix Design Company and The Tournament of Roses. Both entities approved the float and volunteers have been working hard to bring the float to completion.

With the Tournament of Roses Parade only weeks away, the community is coming together to help complete the second float.  Volunteers are coming from everywhere to contribute to the float, we encourage you to participate! More information including volunteer participation and donation contributions can be found at http://www.aarfa.org/.

This year, the AARFA has launched the Armenian Rose Float Ambassador Program, where by volunteers can become city-specific ambassadors of the rose float to raise at least $3,000 from their respective communities. During the December 6 event, Stephan Partamian, President of AARFA, recognized the dedication and work of six ambassadors by presenting them with the first-ever AARFA Ambassadorship pins. Currently the AARFA is seeking to enlist additional ambassadors to represent cities across the US. Those who are interested can email the association at info@aarfa.org.

Last year was a historic year for the American Armenian community with the inaugural float. The second Armenian American float proves to be equally impressive and moving. Partmanian shared, “To date, the AARFA has raised $180,000 of the $300,000 needed for the construction of the second Armenian rose float and its participation in the Pasadena Tournament of Roses. We are looking for Armenian community wide support, since this float again belongs to all”.  We cannot wait to see the beautiful float featured in the Parade!