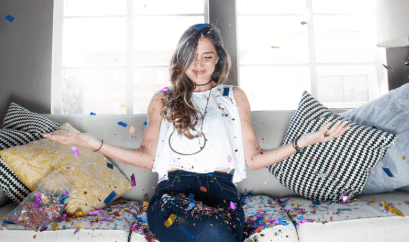 THRIVE is an AIWA-SF April project dedicated to highlighting Armenians who are doing amazing things in their personal and professional lives to better themselves and those around them. These individuals are inspiring, dynamic, innovative and interesting. Today, we feature Nonee Kay Keshishian.

people that life is meant to be lived. From weddings honoring two peoples’ commitment to each other to thousands of people in an airline hangar celebrating their years’ work of shooting a rocket into space…Nonee does it all. She and her brother launched a catering and event production coalition 11 years ago out of their parents’ kitchen. They called it @kitchen12000 and went full steam ahead in an industry they knew little about. Turns out if you’re really passionate about a cause, the way they are about building community and performing sociological experiments with strangers, you can become really good at something fast. From there they expanded to running @vertigoeventvenue where hundreds of parties are hosted year after year. Their biggest dream at the conception of KAY12 was to house artists and makers. A few years ago, they launched @shocktank, a 7 unit property with live/work lofts all decked out by resident artists and those who fly in from all over the world to add a piece of their magic to their spaces. This has become their homebase and the place where they derive most of their creativity… With a mission to create a cyclical pattern by spreading joy to others in the hopes that it will resonate around the world and return back.

I hope that basic human rights are equally guaranteed to all without regard to race, gender, religion, class, or orientation.

Probably the fact that hummus became globally “cool” just a few years ago, but we’ve been sweating garlic and tahini all our lives. #trendsetters

I’ve always had this innate desire to bring people together, to remind ourselves that there is strength in numbers, and to use our differences to our advantage. I would argue community building is a foundational belief in the Armenian culture. Kudos to the generations before us having done a great job instilling a sibling-hood within us.