THRIVE is an AIWA-SF April project dedicated to highlighting Armenians who are doing amazing things in their personal and professional lives to better themselves and those around them. These individuals are inspiring, dynamic, innovative and interesting. Today, we feature Mr. Karen Daduryan

Mr. Karen Daduryan is a national of Armenia with an extensive UN career and expertise in leadership, strategic planning, management, programming, including in humanitarian context, and resource mobilization. 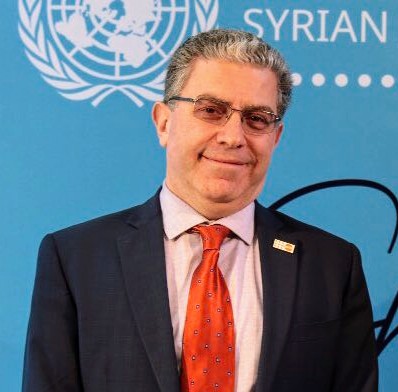 Mr. Daduryan began his career in 1993, with the newly opened US Embassy in Armenia, where we worked with the US Ambassador as Political and Economic Officer at the time when Armenia was undergoing its complex transition to become an independent nation. In 1995, Karen joined UNDP, where he worked as a member of core team for preparation of Armenia’s National Human Development Report. He later continued with UNDP as the lead officer for the Social Development portfolio, including the largest Integrared Sustainable Development Programme which was formulated and implemented under Karen’s coordination and oversight.

Karen moved to UNFPA in 1999 as the Programme Officer overseeing the establishment and expansion of UNFPA Country Office in Armenia. He later assumed the responsibilities of UNFPA Assistant Representative in the same country office. In UNFPA, Karen led successful development of the first Country Programme in Armenia which served as the main framework for the Fund’s assistance to Armenia.

In 2005, Mr. Daduryan joined UNFPA Headquarters in New York, where he worked in the Strategic Planning Office and later in the Programme Division, contributing to the development of UNFPA’s Strategic Plan 2008—2011 and roll-out of results-based management, as well as corporate accountability and reporting systems.

In 2009, Mr. Daduryan joined the newly established Eastern Europe and Central Asia Regional Office (EECARO) in Istanbul as Deputy Regional Director where he played a crucial leadership role in establishing from scratch and operationalizing the new regional office.

In February 2016, Mr. Daduryan was appointed as Deputy Regional Director in Arab States Region where UNFPA delivers humanitarian response and resilience-based programmes in complex humanitarian emergencies. His portfolio included leading and coordinating the regional team support to country offices operating in Syria, Iraq, Yemen, Libya, and Horn of Africa, among others.

In September 2018, Mr. Daduryan began his assignment in Syria as UNFPA Representative where he is currently leading one of the largest UNFPA operations globally in a complex and protracted context of the Syrian crisis.

Mr. Daduryan holds a Master’s Degree in Oriental Studies from Yerevan State University, as well as Diploma in International Relations from Haigazian University College in Beirut.  His professional training includes leadership programmes with e-Cornell (US) and Canfield (UK) Universities, as well as the UN Leaders Programme with the UN System Staff College; he also studied corporate law, health financing, strategic management, and programme development. Mr. Daduryan is married with one son.

Empower people to positively change their lives; act against any type of inequality and discrimination among humans; stand with and for women and girls to ensure their dignity, equality, and protection from any kind of violence and abuse; spread kindness through words and acts.

My hope is to live in a world where human suffering is no longer unavoidable and where the power of human mind is used for bettering our lives and not for bringing more misery and humiliation upon people.

Deep feeling of connectedness with so many layers of human history and civilization globally, while maintaining my unique identity of a small yet resilient and spiritually powerful nation.

Question: How has the Armenian Culture shaped/influenced you?

I was born to Armenian culture and have a strong sense of belonging to its complexity with all its positive features that make me proud and negative aspects that I would love to change.  I am also deeply connected to the land and country, and while significant part of my life was spent outside due to nature of my work, it never occurred to me moving permanently to another country. My privilege of emersion in so many other cultures of the world has given me the opportunity to value who I am and what I can give to others as an Armenian and what I can learn and appreciate in other cultures. One lesson I have learned is that beyond any culture and identity we have to cherish our humanity, its universal values and aspirations.

About AIWA-SF:
The Armenian International Women’s Association is a dynamic global 501(c)3 dedicated to empowerment, education and enrichment. Through many projects and initiatives, AIWA is dedicated to inspiring, empowering and connecting Armenian women worldwide.
AIWA-SF is an affiliate chapter of the Armenian International Women’s Association, the EIN #: 04-3113182. Donations marked for AIWA-SF are routed to the affiliate chapter.
To get involved with the AIWA-SF affiliate, please visit http://www.aiwasanfrancisco.com or send an email to aiwasanfrancisco@gmail.com. We are grateful for all donations. To help us promote progress, contributions can be mailed to: AIWA-SF 15559 Union Ave #227 Los Gatos CA 95032