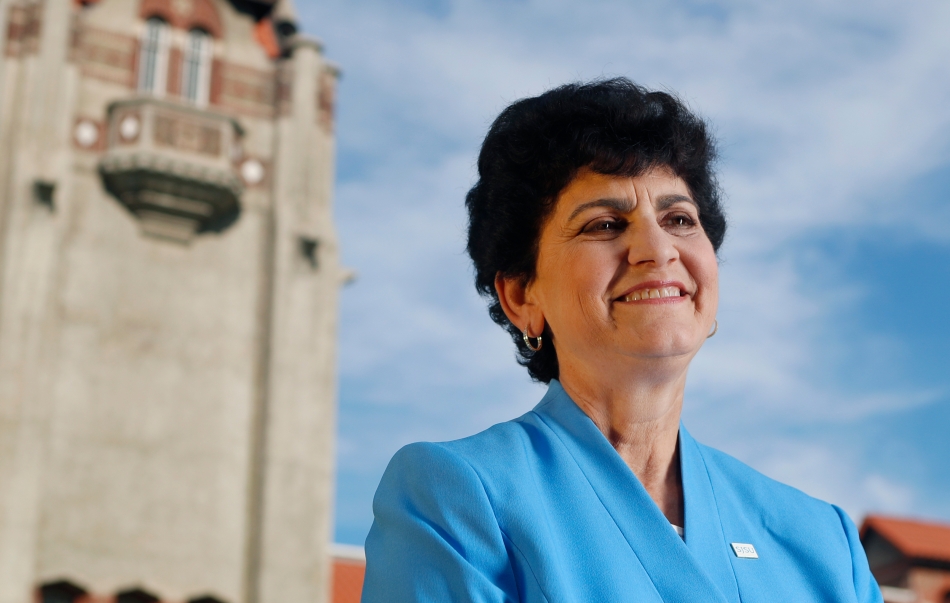 THRIVE is an AIWA-SF April project dedicated to highlighting Armenians who are doing amazing things in their personal and professional lives to better themselves and those around them. These individuals are inspiring, dynamic, innovative and interesting. Today, we feature President Mary A. Papazian.

How does a scholar of the 17th century metaphysical poets, including John Donne and John Milton, become the leader of a flagship public university that fuels the creativity and energy of Silicon Valley?

Perhaps the answer for Dr. Mary A. Papazian, president of San José State University since July 2016, is her fascination with how artists and the arts reflect, interact with and 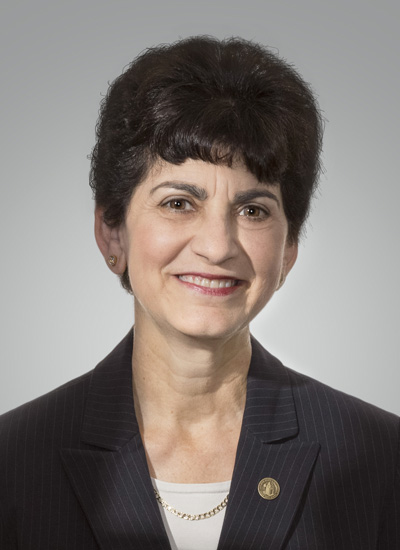 survive in turbulent times, as they certainly did the early 1600s in England, a period of great innovation in all spheres, and no less so today. Using these insights from long-ago poets gained over the past three decades, she has built her academic career as a professor and as an academic and administrative leader dedicated to the enduring importance of public education to the benefit of society.

Since she arrived at SJSU in 2016 to become the leader of the oldest public university in the west, the founding campus of the California State University system, and Silicon Valley’s only public university, Dr. Papazian has remained focused on strengthening communication among campus leaders, students, faculty and staff. She has been energizing alumni, supporters and friends of the university, as well as elevating engagement with elected, industry and community leaders on important regional policy issues such as affordable housing, transportation and economic opportunity that are critically relevant to an urban university.

Notable milestones since Dr. Papazian’s appointment include the groundbreaking for the Interdisciplinary Science Building—the first new SJSU academic building in 30 years—and approval of plans to build a Science Park. She spearheaded a series of Town Hall events hosted by SJSU’s Institute for the Study of Sport, Society and Social Change, launched a full renovation of the South Campus Athletics Fields, developed the East Side Promise program to support talented local students, and, working collaboratively with the university community, launched a ten-year strategic plan, Transformation 2030, that positions SJSU for long-term excellence in the 21st century in the nation’s tenth largest city.

In January 2020, Dr. Papazian brought a group of government and civic leaders together on the SJSU campus  to announce the university’s plans to redevelop state-owned property in downtown San Jose to help meet the affordable housing needs of faculty, staff, and students, as well as to announce short and long term strategies to address the needs of SJSU’s most vulnerable students.

Before coming to San José State, Dr. Papazian served as president of Southern Connecticut State University in New Haven, Connecticut, for nearly five years. She strengthened programs supporting the successful transition of first-year and transfer students. She established a vision for SCSU’s first-ever comprehensive philanthropic campaign, and under her leadership the university opened its new Academic Laboratory and Science Building and expanded international education and study abroad programs, among other achievements.

Of Armenian heritage and a native of southern California, Dr. Papazian holds bachelor’s, master’s and doctoral degrees in English literature from the University of California, Los Angeles. She and her husband Dr. Dennis R. Papazian, founding director of the Armenian Research Center at the University of Michigan, Dearborn, have two adult daughters.

In recognition of her work within the Armenian community, Dr. Papazian was named 2018 “Person of the Year” by the Knights of Vartan and “Woman of the Year” Award by the Daughters of Vartan, at their Annual Convocation. She also received the Saints Sahag & Mesrob Medal, bestowed by His Holiness Karekin II, Catholicos of All Armenians and the Medal of Distinction from the Ministry of Diaspora, the Republic of Armenia.  For her work in fostering partnerships between Armenian and US higher education institutions, Dr. Papazian was awarded the Khachatur Abovian Medal by the Armenian State Pedagogical University after Khachatur Abovian in Yerevan, Armenia, from which she received an honorary degree.

I am an optimist by nature, and that optimism undergirds my belief that everyone should have the chance to live a life of fulfillment and contentment, filled with opportunities and the ability to pursue their passions.  For me, it starts with family and home and our long and proud Armenian heritage, which provides the anchor from I gain my confidence to explore and thrive.

We live in a time of challenge and fear, and never has that been more true that during this global pandemic.  My hope for the future is that we can find a path forward together, recognizing that our interdependence is greater than what divides us. I am confident that collectively we have the knowledge, experience and vision to create a future that is equitable and that addresses the large problems of our day, and does so with our human experience at the center.  I also hope for a thriving Republic of Armenia in positive, dynamic tension with the extraordinary Armenian diaspora. We are one people with a shared history and a shared future.

The connections between all of us and the power of the Armenian church, expressed especially through the Badarak.  Wherever I go, all I need to do is find another Armenian, and I am home. And I can experience Badarak in any Armenian church in the world and I will feel at home. I have lived in different communities throughout the United States, and in each there was a wonderful Armenian community.  The same is true when you travel the world. I love that Armenians have been around from the earliest of days, that we have been a witness to the entirety of human history, and that even a genocide couldn’t stop us. I am excited about the possibilities for the future and love traveling to Armenia to witness the rebirth of our nation.  It is a connection, an identity, that is empowering and essential. We are small but mighty. Creative and innovative. Incredibly empowering.

I grew up in Los Angeles before there was a large Armenian community.  In fact, my family was one of the first 10 Armenian families in LA. And while Armenian was around me, I didn’t grow up speaking Armenian.  So I understood and felt being both within the culture and looking at it from the outside. Over time, I learned how to bring these different parts of my experience together, realizing that all of us as Armenians have multiple identities and experiences. I think this experience has made me more sensitive to the experiences of others in our diverse communities, the experiences of my many students and colleagues and how their cultures and histories shaped them.  I have been enriched by their experiences and have shared mine. I believe in the commonality of humanity expressed by the richness of cultures. We should wear our Armenian pride with confidence, as we add to the rich fabric of humanity.