He don’t eat no meat?

What do you mean he don’t eat no meat?

Many of us fell in love with Andrea Martin in my Big Fat Greek Wedding (2002) and My Big Fat Greek Wedding 2 (2016) when she played the beloved Thea, Aunt Voula. Currently, she stars in NBC’s hit TV show “Great News,” airing Wednesday nights. In this role, she plays an overbearing Mama working at the news station where her daughter Katie works. It’s laugh out loud funny!

Andrea Martin is a talented entertainer – she sings, she dances, she makes audiences around the world laugh so hard they cry! We are absolutely enamored by her and are honored to have her in our Armenian community.

Andrea Martin will be performing for the Armenian International Women’s Association on Saturday, May 27 to support our fundraising goals.  Proceeds will go to support women and families who are victims of domestic violence.  Sharing the stage with the extraordinarily talented musician, actor, writer, and radio host Seth Rudetsky the event is going to be simply spectacular.  AIWA-LA President, Silva Katchiguian says, “having Andrea Martin support us in such a way is an incredible treat. She’s an absolute gem and we thank her for bringing her talents and energy to support the efforts of AIWA. What’s more, the incredible Seth Rudetsky will be joining her. It’s going to be a spectacular show!”

Laughter is natural medicine for the soul,  through her spirit, humor and love for life Andrea Martin, dazzle us with Seth Rudetsky. We invite you to join us for an epic evening of laughter and inspiration.  AIWA-SF President Christine Soussa says, “We love Andrea and cannot wait to see her in person!  It’s heartwarming that a celebrity of her status is taking the time to support AIWA in such a meaningful way.” 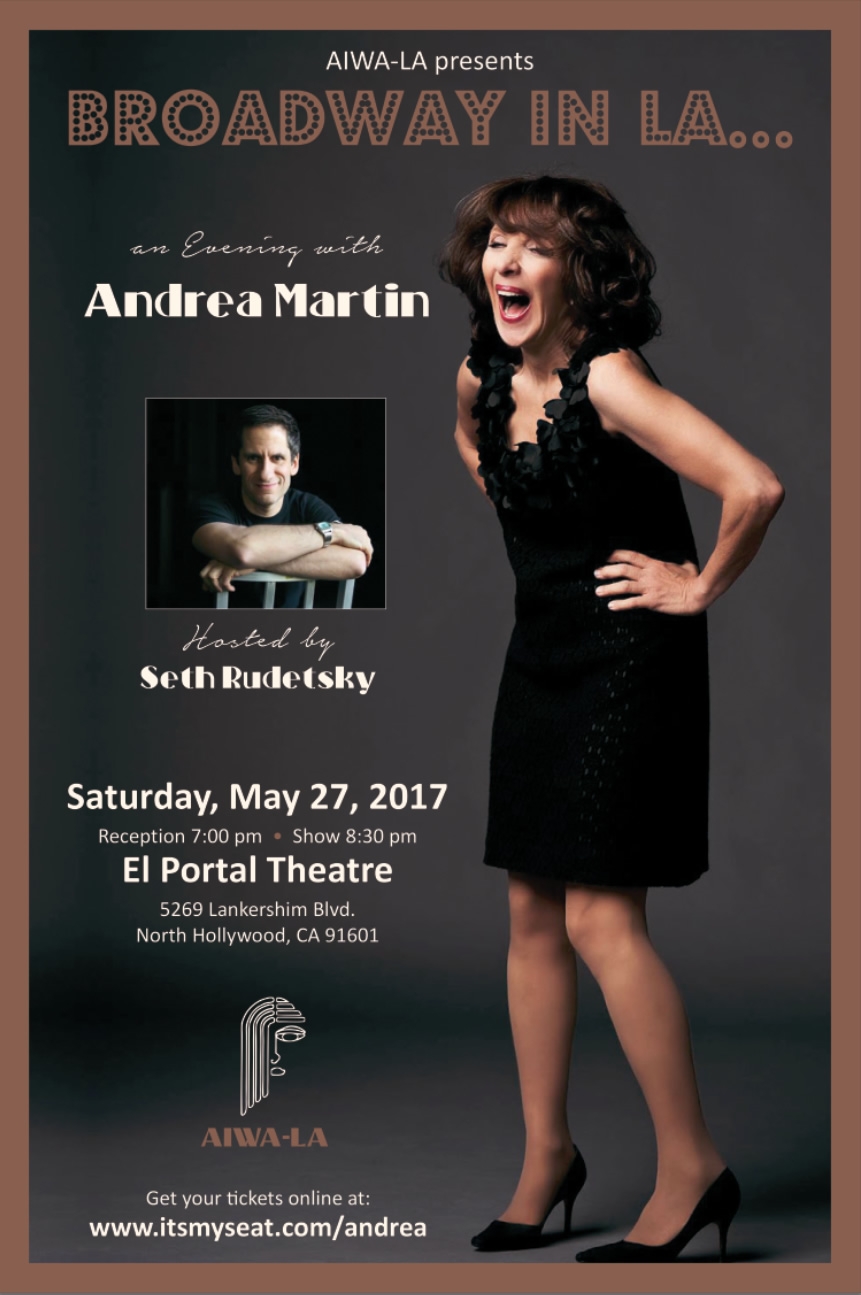 In a recent interview with Journalist Joan A. Quinn, Andrea said “Being Armenian is who I am. Being authentic and genuine is what defines you and contributes to a long career. I am beyond grateful to have the roots I have in Armenian culture and history. I wear my heritage as a badge of honor.” An active supporter of AIWA, proceeds from this event will go towards funding our initiative dedicated to giving Armenian women and their families a second chance at life. This initiative is focused on providing physical, mental and emotional support to help women re-create their lives for themselves and their children after being victims of domestic violence.

Known for her unforgettable role as Aunt Voula in the breakout hit, “My Big Fat Greek Wedding,” Andrea Martin has received more Tony and Drama Desk Award nominations as a featured actress in a musical than any other actress.

Andrea Martin began her career as a singing chicken on the Captain Kangaroo television show. She was then cast in the United States Touring Company of You’re A Good Man Charlie Brown, in which she played Lucy. During the tour, she visited Toronto Canada, fell in love with the city, moved there and within a month, got cast in the Toronto production of Godspell.

Ms. Martin has received four ACTRA awards for her participation in SCTV, two GEMINI nominations for hosting the 2007 Winnipeg Comedy Festival and for the CBC miniseries, St. Urban’s Horseman. For Martin’s work in the recent Toronto production of Love, Loss and What I Wore, as well as her one woman show, “Final Days! Everything Must Go!!”, she received Broadwayworld.com’s 2010 best actress and best theatrical event awards

Seth Rudetsky has played for more than a dozen Broadway shows including RAGTIME, LES MIZ and PHANTOM. He was the Artistic Producer/Music Director for the first five annual Actors Fund Fall Concerts including DREAMGIRLS with Audra MacDonald (recorded on Nonesuch Records) and HAIR with Jennifer Hudson.

The Armenian International Women’s Association is a dynamic global non-profit dedicated to empowerment, education and enrichment. Through many projects and initiatives, AIWA is committed to impacting positive social, economic and personal advancement of Armenian women worldwide through educational and other community activities that promote gender equity, and emphasize our Armenian cultural heritage.

0 comments on “An Evening with Andrea Martin & Seth Rudetsky”