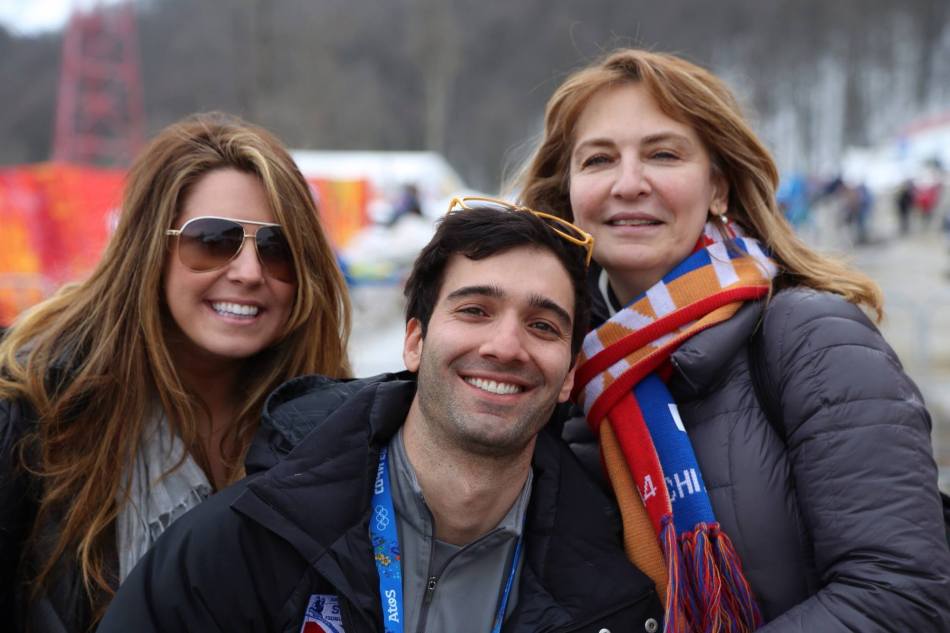 I (Christine Soussa) had the pleasure of meeting with Anita Serebrakian. On a sunny day, over coffee we chatted about her journey as an Armenian Mom who had both her children Ani Serebrakian and Arman Serebrakian compete in the Olympics!  Anita was born in Tehran, Iran and moved to America in 1980’s, she got married to her boyfriend from back home (her current husband) and moved to Detroit so she could support her husband as he completed his medical residency.

As we start chatting, I am struck by her calm demeanor.  The Serebrakian family has experienced an incredible journey, not once but twice!  In 2010 Anita’s youngest daughter Ani represented Armenia in the Olympics hosted in Vancouver, Canada. Most recently her son Arman represented Armenia in the 2014 Olympics in Sochi, Russia. Both are alpine skiers and Anita says her kids grew up “as twins”. When asked how skiing became the sport of choice, especially for a California family, she shared that California is actually an ideal ski state. Many top Olympic medal winners are from California: Julia Mancuso, Jonny Moseley, to name a couple, it’s a shame that California universities do not support the sport and thus many athletes, like both her children, seek higher education out of state.

She accredits her husband for transcending his passion for skiing to the family.  Her husband, Armen, has an innate love for skiing and taught Anita how to ski. With a giggle she says “she learned so she could keep him company”.  After they had kids, it was only natural that their children learn the sport as well, so they could have something fun to do as a family.  By the time Ani and Arman were 4 and 6 they were already competing on the Northstar Racing Team.  It turned out that both kids showed great potential, they were “more than just a good skier”.

And from there, their love, passion and dedication to the sport grew.  Rain or shine, their winters were devoted to skiing; Anita jokes saying, “we would tell our local Armenian friends, please don’t forget about us, we are free starting April”. During the months of December – April they would spend every Thursday-Sunday in Lake Tahoe so their children could ski, train and practice.  She says that because both her children kept good grades, throughout their education schools were okay with Ani and Arman being absent from school on Fridays.  Since they could only train on the weekends, her husband kept them on track. They would play tennis to stay fit and dry land train with their Dad’s coaching.

By the time the kids were 10 and 12 they had qualified for the World Jr. Cup hosted in Whistler Canada.  Anita says this was a “huge honor” for her. She shares that at that moment she said if the kids wanted to stop then Armen and her would have supported that, but since her kids loved the sport and since they showed exceptional potential, she would support them unconditionally.

The Serebrakian love for skiing is a true family affair.  As they would spend their weekends in Lake Tahoe they started to make dear friends, and this made both the competitive and personal side of the sport fun.  I am struck by her routine.  She adjusts herself and says “okay this was my routine, those days I had so much energy. We would leave for Tahoe on Thursday night and the kids would be on the slopes by 8:30am on Friday.”  My favorite part of this story is when she starts speaking about food saying “I had the menu planned, as an Armenian mom, you know we don’t do convenient food and I didn’t want my kids eating outside lunch. So I would have 3 days of food ready. When the kids would come down from the slopes into the eating area the whole cafeteria would smell like Armenian food.  Other kids would look at Ani and Arman and wish they had a home cooked meal.  Since we are Persian Armenian many of the other families would ask ‘why is your rice always a different color’. So in many ways I showed my support by being present and by feeding them”.

I asked her, when did things change, when did the Olympics become an option?  She said in January 2005 Arman was about to be chosen for the USA Olympic Team, but around then he had an ACL injury and couldn’t join.  At that point she switches into Armenian and sitting upright she says, “you know the Armenian saying ‘chi ga chareek arantz pareekih’… Yes, Arman was upset but this ended up being the best thing because he was able to go to college.”  Arman went to the University of Colorado at Boulder and excelled academically and athletically. He was on the NCAA Ski team for 4 years and afterwards was also the Assistant Coach to the University team.  She says right around that time, we learned that Arman and Ani could represent Armenian, “with that news a light bulb turned on in Armen’s head”.

With that Ani represented Armenia as one of the first and only female Armenian skiers in the 2010 Olympics in Vancouver.  You can see the elation of pride on her face and hear it in her voice as she speaks of the journey and what it represents.  She says Arman’s experience was different, “he was not selected for the

Armenian team despite being the top ranked male Armenian alpine skier in the world. Thus, he chose to enroll in medical school after completing his undergraduate education, and two years later decided to take a year off to pursue his dream one final time. “He had to start all over” with a jolt of pride she says, “and he did it!”   She speaks of her son’s remarkable dedication, athleticism and of the Armenian community, who through social media, fundraising and word of mouth raised over $50,000 to help send Arman to the 2014 Sochi Olympics.

Another favorite story Anita shares is about an Armenian Mom’s heart…I asked her what it felt like to watch her children. She says, after both her children had a few incidences on the slopes and she would see her children come down the mountain on a stretcher, she stopped watching. “As a mom, my heart would come out of my mouth, so I would not watch them, I just couldn’t”. Even I got choked up and started to tear…  Then she smiles and says “but the Olympics’, I watched!

I would rock myself back and forth and talk to the TV” as she tells the story she starts rocking, “I’d say ‘Go Ani, slow down’, ‘Keep it up Arman, turn’” with a giggle she says “I don’t know if I was talking to them as a coach or if I was talking for me”.

Speaking of Sochi she says the experience was unbelievable. As many Russians do not speak English she was comforted and surprised at how many Armenians there were in the city of Adler where almost 60% of the population is Armenian.

I asked her what advise she would give to Moms, after thinking a moment:

–          If you see potential in your children, do not stop it because of your own selfishness, but support and mold it

–          Teach your children that there is a place for everything, you can do everything in the right time

In closing Anita says “when I think about the journey I throw up my hands and say ‘OH MY GOD!’ It’s been incredible. As an immigrant living in the US people encouraged us to get our children involved in sports because it would open doors to good colleges.  My children are both remarkable Olympic Athletes and their athleticism did not open doors to University, so do things that are fun and natural for your family. Above all always love and support your family, that’s what Mom’s do”.

AIWA-SF congratulates the Serebrakian family and applauds Anita’s unconditional support to her family and children.  Many congratulations to Ani and Arman for representing Armenia and for being such an incredible role model to other Armenians!

0 comments on “A FAMILY AFFAIR: ANITA SEREBRAKIAN’S JOURNEY OF SENDING HER CHILDREN TO THE OLYMPICS’”