Myanmar is not the first destination that comes to mind while planning a vacation. It does not have the breathtaking skyline of  Hong Kong or the amazing beaches of Thailand. It does not have the cultural gravitas of Paris or London. Until a friend had mentioned it, I had never thought much about Myanmar before and certainly never considered a visit. But proximity and coincidence brought me there in September. It was a once in a life time trip and one that I will never forget. 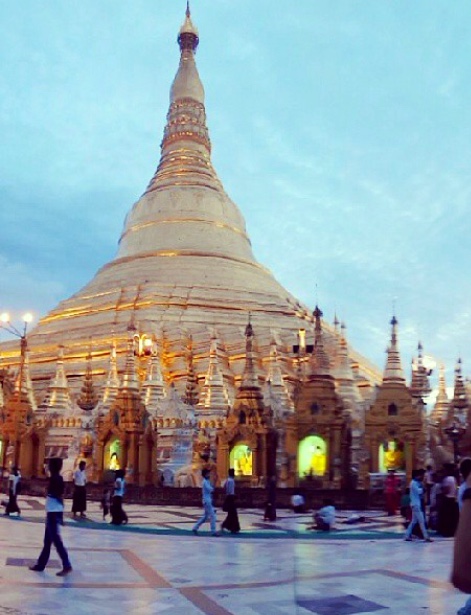 Before my trip to Yangon, while visiting Hong Kong, a colleague gave me a book about Sir Paul Chater, an Armenian businessman known as the father of modern Hong Kong. He was a legend. Ask anyone in Hong Kong today about Lord Chater, and they will know. Chater Street, one of the longest in Hong Kong, is named in his honor as well as Chater Garden and Chater House. This is a source of pride for me and should be for all Armenians. A self made multi- millionaire who was an orphaned immigrant from Calcutta, he epitomized the rags-to-riches story we see in the movies. His story is much like many of our own ancestor’s stories.

Lord Chater’s success is especially meaningful to me, as my great grandparents escaped Turkey during the Genocide and lived in Manzhoulli, China until 1947.  My grandmother was born and raised in China, was fluent in Mandarin and was as much Armenian as she was Chinese. So our history, the history of Armenians in Asia, is even more significant to me given my family background.

In the book about Lord Chater, I was surprised and delighted to find a picture of the Armenian Church in Yangon, Myanmar (formerly Rangoon, Burma.) I could not believe it! Who knew there were Armenians living in Myanmar and that they had built an Armenian Church? Equally, who knew there was a thriving Armenian community dating back to the early 18th century?

The Church in Yangon was part of a successful and prosperous Armenian community of tradesmen from Julfa, Iran. The land the Church was built on was a gift from the King of Burma, who had a good relationship with the Armenians of Rangoon and rewarded them with the land. Now, this trip would have a deeper meaning, a purpose if you will. It really was meant for me to visit Myanmar. ..

I arrived in Yangon on September 18th. It is a poor country, but lush and green.  Its beauty juxtaposed by dirt, garbage, noise, pollution and terrible traffic. I told my parents; Yangon makes Yerevan look like Geneva. However, I found the people of Yangon to be friendly and kind, their Pagodas (Buddhist Temples) and colonial architecture interesting and beautiful. I imagined what it would be like for an Armenian traveling from Julfa in 1850. What a long, miserable and treacherous journey it must have been. Many did not make the journey alive. I mean, I was tired after two flights and a five hour connection from Hong Kong! Being on a boat for months with hundreds of other people… The thought is horrifying.

After my first day settling in, I decided to venture into the city and find the Armenian Church. I left the hotel with my trusty map, thinking I was close. My sense of direction is good (I think) but it seemed like I was walking around in circles for hours. The heat and humidity in Yangon is almost unbearable. And after hours of walking around what seemed like the same streets, over and over, I had almost given up.

I asked a few locals for directions, or at least some direction. But most Burmese speak very limited English. Just when I had lost hope and decided to go back to the hotel, I saw the steeple of a Church. Not a Kmpet typical of our churches, it is more Gothic in style. I crossed the street and read the sign “St. John Armenian Apostolic Church” Mass every Sunday at 10 am, all are welcome “

At that moment, in a busy and dirty street in a very far off land, I felt at home and not so lonely. I was overwhelmed with emotion. By the thought that Armenians like me, adventurers, tradesmen, who left their home in Julfa in the 1850s, had taken a long journey and attended Church here. Right here on Merchant Street. I imagined the streets and buildings were not very different 150 years ago.  And while I cry easily, my tears at that moment were those of joy and pride. Pride for our history and joy to see that our history is still alive and thriving in Yangon, Myanmar of all places.

This Church is the second built by the Armenian community of Yangon. The first one was not far away built by Gregory Avas with local bricks and a wooden spire, around 1766. This was most likely a grant of land from the East India Company. Directly across from the Church is a huge tree with large, twisted roots. And vendors line the street, much like all over Yangon, selling food and seeds for the hundreds of pigeons that gather in the streets. A street vendor points to me, knowing I wanted to enter the Church, and directs me to a small house on the side of the lot. I open the gate and meet the caretakers wife. They live in a small hut on the Church property and oversee the maintenance. She tells me her husband is not there. Disappointed, I walk around the property myself. It is surprisingly well maintained. The asphalt around the Church is new, and the trees and landscaping well taken care of. Much like the rest of Yangon, the garden is lush and green and the garden is quite nice.  In front of the main door are plaques dedicated to the memory of parishioners and the original benefactors of the Church. And another plaque from when the church was erected, 1862. 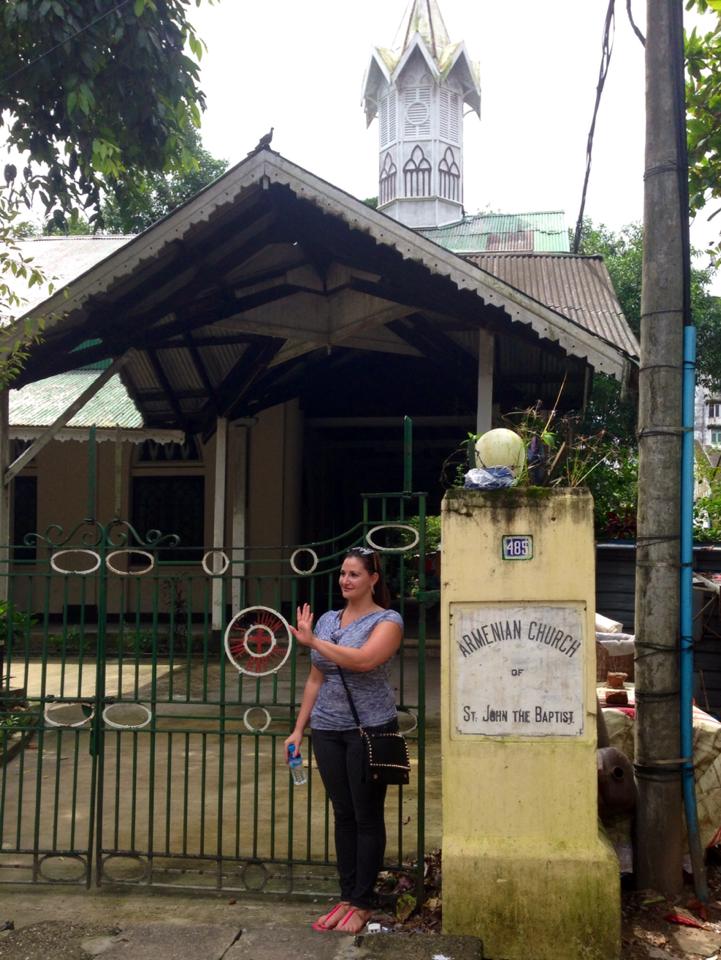 While walking around the property, I meet another man sleeping on a bench. He looked homeless. But he speaks excellent English, better than any other local I encountered and begs me for money.  He says he’s paralyzed and that he used to be the caretaker, but no longer can maintain the property because of his health. I decide to give him the equivalent of $5 (which can go a very long way in Burma) and as I hand him the money, he smiles and gets up and shows me around the property. I thought he was paralyzed, but oh well. I was feeling generous… I later learned that Percy (the “paralyzed” man) was part Armenian and a parishioner of the Church.

Frustrated that I could not enter the Church, I told the caretakers’ wife I would return the next day at 3pm.  She said she would tell her husband and he would get the key and meet me there at 3pm. It was my last day in Yangon.

The following day I returned only to find the caretaker  was there, but without the key. He said he would call the priest and that he would open the door for me. But the priest did not come. Incredibly disappointed, I left the Church again. I was leaving the following morning. And had travelled all this way on a once in a lifetime trip, and didn’t get to go inside the Church.

A part my heart sank knowing that I would probably never return to Yangon and I would never get to see this Church. It is not that I am religious and I am almost ashamed to say I seldom attend church at home.

It was for the experience. There was a deep connection that I felt the moment I saw the Church from across the street. It was like being at home. Thousands of miles away from home, there was a familiarity. A bond, a connection to our roots and traditions. It’s something that I have a hard time explaining to my non Armenian friends. A feeling. An emotion. A connection. It’s just there. I was raised in the Armenian community and seek it out wherever I go. I can always feel at home and my true self when surrounded by our culture, history and with other Armenians. Even when I’m thousands of miles away.

As luck would have it, Typhoon Usagi reached the shores of Hong Kong the morning of my intended return flight (s). It was like fate. Like Mother Nature was on my side. For once! My three flights were cancelled, and I had to stay in Yangon until Tuesday after the storm passed. Four more days in Yangon! Elated, I decided to attend mass Sunday morning.

Sunday was a rainy day. Hot and extremely humid. But the rain was not going to keep me away from Church.  I could not leave Yangon without going inside. I entered the Church. There were about 10 other people inside. I was excited to see that the mass is attracting parishioners. The Church is not like a typical Apostolic Church, looks much more plain, almost like  Protestant Church s. But the ceilings are high and the windows large, letting in light, the sound of raindrops, and the views of the lush, green garden. The windows are open and you can hear the droplets of rain during mass.

I am shocked to hear Armenian! A thin Burmese woman is singing the sharagans, alone and in Armenian! The badarak is totally different from home, this much I know. It was barely an hour long (A good change, if you ask me. Church is far too long at home) and the order of the songs seem different. But, they are in Armenian. The priest is Indian and conducts the mass in English. And stopped midway during his sermon to greet everyone and shake our hands. It was touching.

After mass, I introduce myself and meet the singer in the choir. Her name is Rachel Minus (Minassian.) She looks Burmese. And is a descendant of one of the original Armenian families from Julfa that came to Yangon in 1800s. She told me that she learned the songs from her grandfather. She reads and sings from the Bible in Armenian, but spelled phonetically in  Burmese. It was amazing.

At that moment, I was proud and amazed that after over 150 years, she still goes to Church and is singing in Armenian. She also told me there are other families, all are intermarried, but they never attend church.

It was an experience that was almost surreal. Attending Church, an Armenian Church that was once part of a thriving and successful Armenian community in Yangon and hearing the songs in Armenian while in Myanmar. A place that I never would have thought Armenians would live or even visit. But there I was. Just like the Minus family before me. It was a moment that made me think the world is so small and that we are all still connected. Our presence is there. It is a part of history that still lives. While sitting in the pews of St John Armenian Church of Yangon, William Saroyan came to my mind.

“Go ahead, destroy Armenia. See if you can do it. Send them to the desert without bread or water. Burn their homes and churches. Then see if they will not laugh, sing and pray again. For when two of them meet anywhere in the world, see if they will not create a New Armenian.”

If you have the opportunity to visit Yangon in your lifetime, take it.  You won’t regret it.