THRIVE is an AIWA-SF April project dedicated to highlighting Armenians who are doing amazing things in their personal and professional lives to better themselves and those around them. These individuals are inspiring, dynamic, innovative and interesting. Today, we feature Nelly Der Kiureghian.

Born and raised in Beirut, Lebanon, Nelly grew up in a warm and nurturing Armenian family and attended a French Catholic school.  At the age of 9 she lost her Father. In the 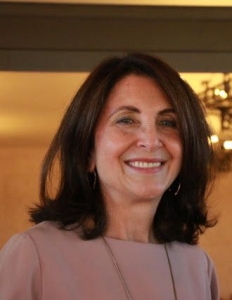 late 1970s, in the wake of the Lebanese Civil War, she moved to Southern California with her family. She attended California State Polytechnic University, Pomona, and graduated with an undergraduate degree in computer information systems. Shortly thereafter, she met and married the love of her life, Armen Der Kiureghian.  Together, they built a home and family in the Bay Area.  They have two wonderful children, Naira and Sebouh.  An avid learner,Nelly studied Japanese language and culture and obtained a Master’s degree in Business Administration from San Francisco State University.  After her children were a bit older, she discovered her true calling to be a teacher. Her first teaching position was at Krouzian-Zekarian Vasbouragan Armenian School.  She pursued her teaching credentials in the evenings, while working as a full-time teacher during the day. During the last ten years of her career, she taught mathematics at Burke’s, an all-girls middle school in San Francisco.  Her aspirations were to empower her students to become confident problem solvers who appreciate the analytical process and grow into life-long math enthusiasts. In 2017, she retired and joined Armen in Armenia, while he was serving as the president of the American University of Armenia.

I read Voltaire’s Candide for the first time in high school and became a convert. My philosophy in a nutshell is “we must cultivate our garden.”

As a descendant of a people who for centuries suffered discrimination, prejudice and ethnic cleansing, my hope for the future is for all human beings to transcend ethnic, religious and racial barriers, to have equal opportunities for education, freedom of thought, freedom of religion, and economic advancement in a free and liberal society.

My favorite thing about being Armenian is the notion that I am part of a global community that includes both the Diaspora and Armenia.  My husband and I have come across Armenians in every corner of the earth, and to our delight, every community has created a small Armenia in far away lands: a church, a school, a community hall, institutions that help anchor them to their roots, their traditions, their language. We have an apartment in Yerevan and enjoy living half of the year there. Living in Armenia makes me feel even closer to my people and culture.

When I was growing up in Beirut, my initial exposure to Armenian culture was through Hamazkayin Cultural Organization, of which my parents were active members. My parents frequently took me to plays by the Kaspar Ipekian theater group directed by the late George Sarkissian.  As a young adult, I vividly remember the exhilaration that I felt sitting in the audience of the theater and learning for the first time about Tehlirian, Talaat, and Operation Nemesis — what an eye-opening experience for a young Armenian girl! That was just the beginning. Throughout the years, my curiosity pushed me to read, inquire and learn about our history, music, folklore and religion.  My curiosity about my culture has also led me to inquire about and appreciate other cultures and civilizations. Undoubtedly, my life has been enriched and my identity more clearly defined thanks to my exposure to Armenian culture during my formative years.